Folkestone’s majestic Town Hall building was completed in 1860. Over three levels, it contained offices, a large assembly hall with a public gallery, a magistrates room, and a covered market place at the rear of the building. 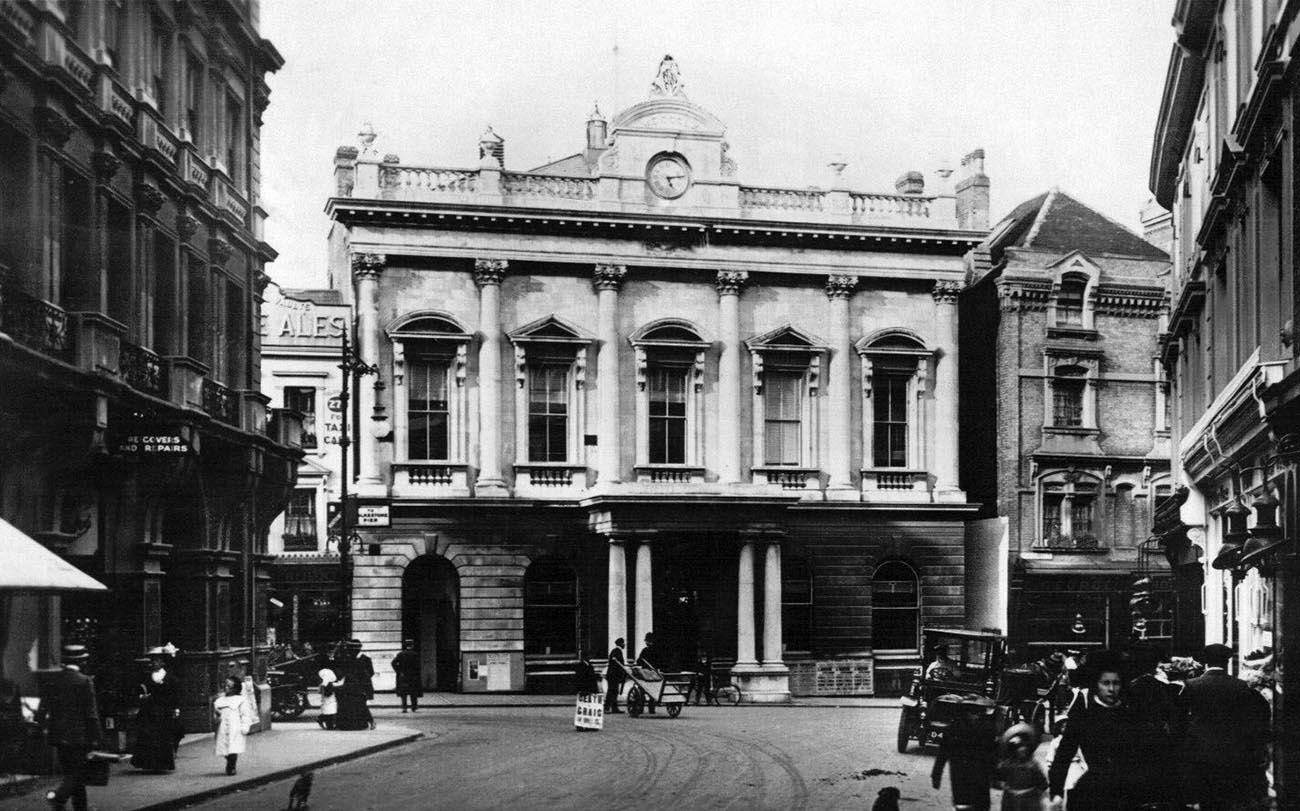 For the next four decades, various public performances and events were held in the assembly hall for the town’s entertainment. Then, in 1896, magician David Devant came to the town with a show unlike anything seen before: a “moving picture”.

Cinema came to Folkestone Town Hall on the 13th July 1896, when one of the first film screenings in Kent was held in the building. The films were made by Robert W. Paul and shown to an astounded audience by magician David Devant, using a Theatograph projector. Afterwards, the Folkestone Herald reported that “nothing finer than these have ever been seen in the town.”

While many early films have been lost over the years, ‘Blackfriars Bridge’ – one of the films shown at the Town Hall in 1896 – still exists today in the collection of the British Film Institute. These early silent films were described as “animated photographs” and often showed simple scenes like this one:

In the early 1900s, the Town Hall continued to show films as a ‘Cinema De Lux’. As the popularity of touring film shows continued to increase across the country, the government introduced the Cinematograph Act in 1909, requiring the highly flammable nitrate films and projection equipment to be enclosed in a fire-proof box for public safety. This led to the first dedicated cinemas opening in Folkestone.

The Golden Age of Cinemas

The first cinema to open in Folkestone was the Electric Theatre (pictured below in 1952 under it’s later name of the Savoy Cinema) on Grace Hill in 1910. 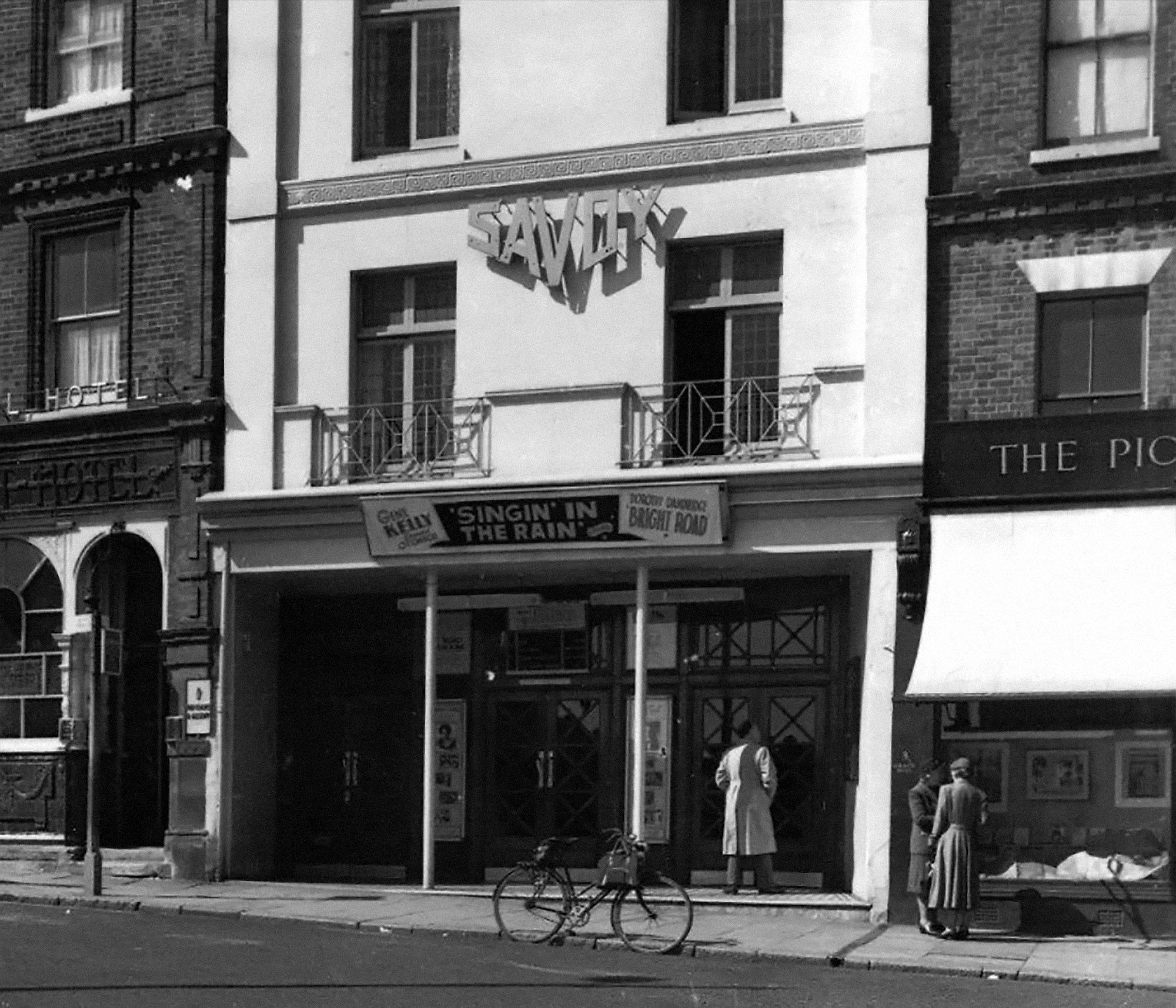 The Electric was soon followed in 1912 by the Playhouse on Guildhall Street, the Queen’s on Tontine Street, and the Central Picture Theatre on George Lane. 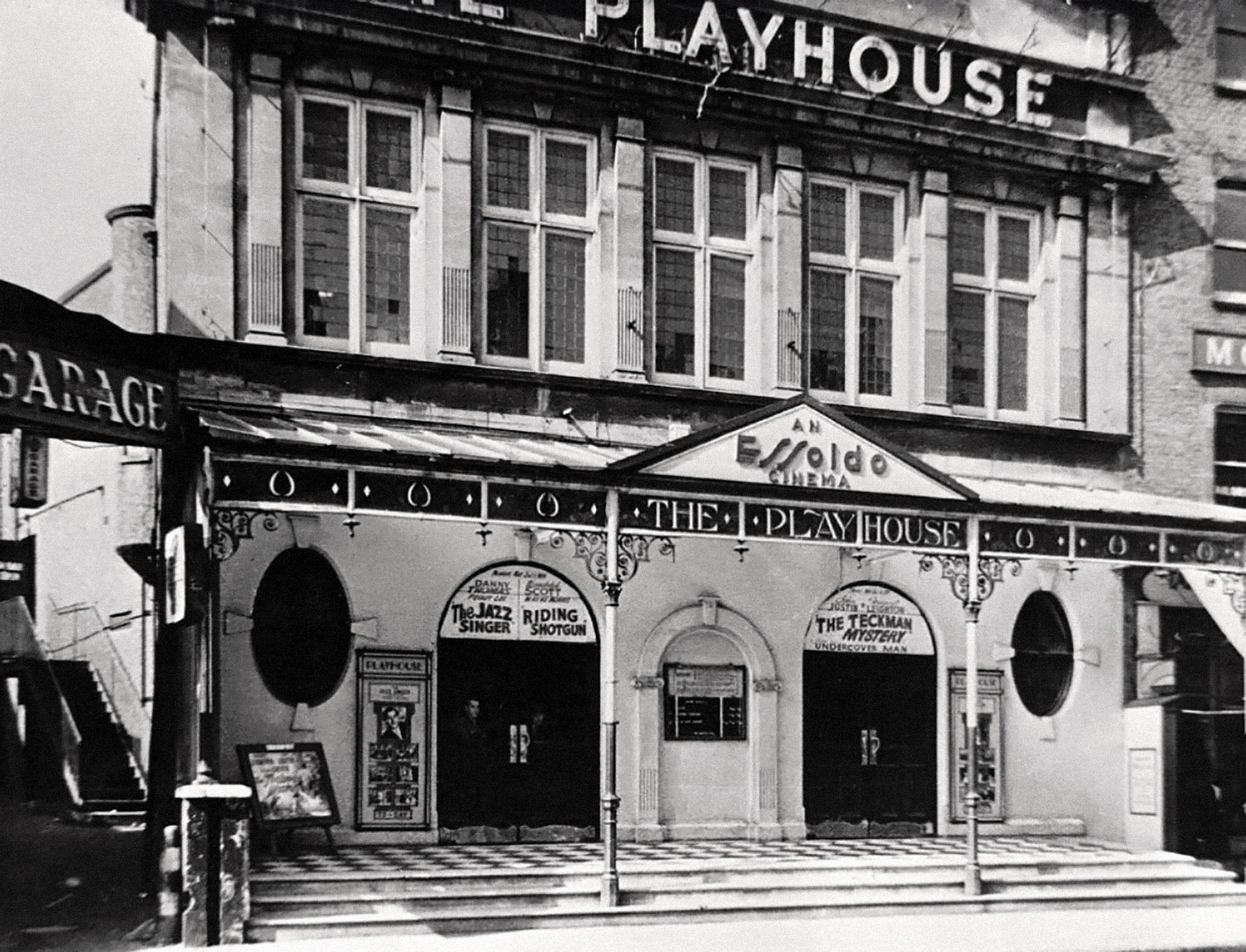 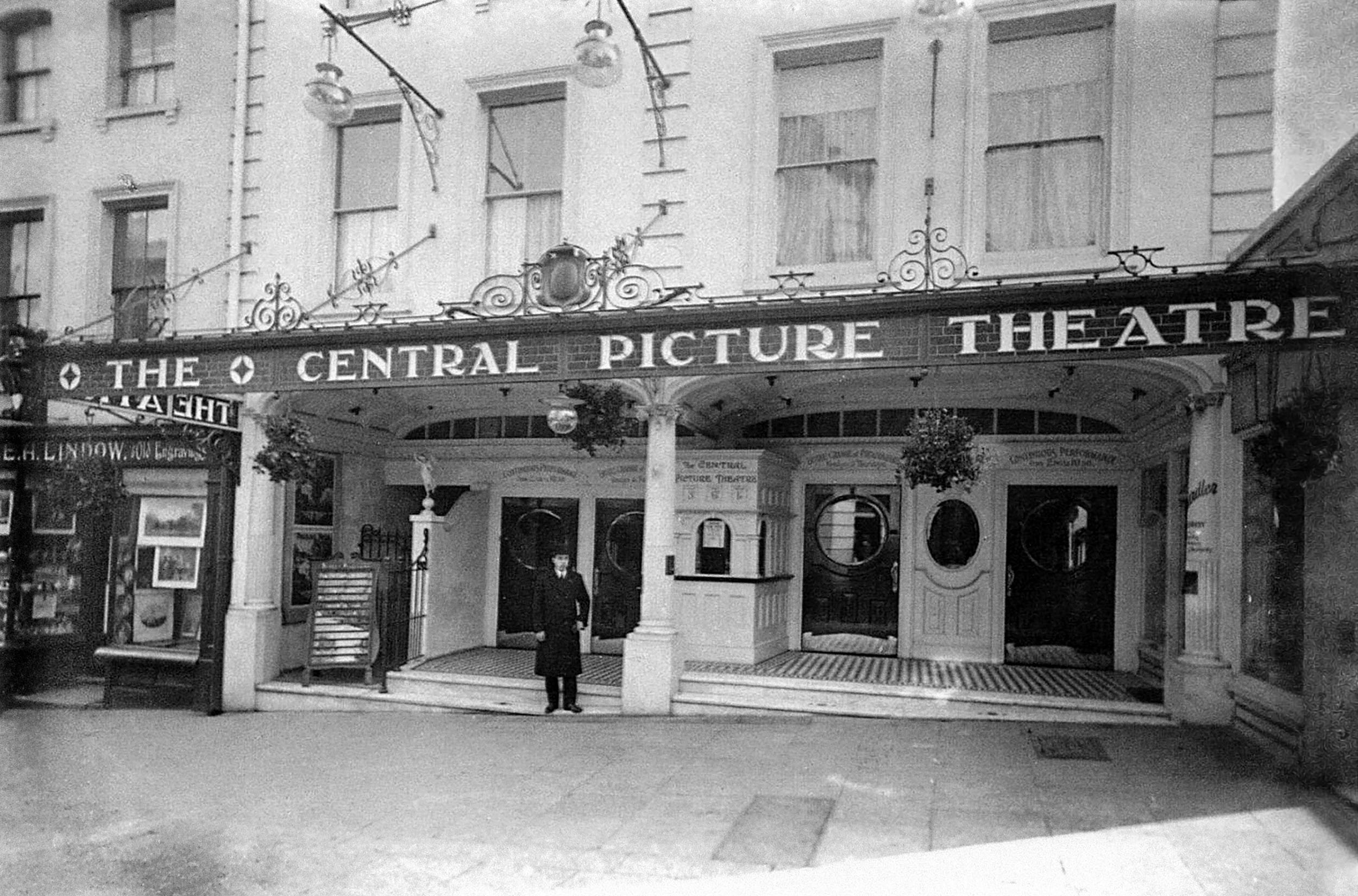 Later in 1934, the luxury Astoria Cinema (pictured below in 1955 under it’s later name of Odeon) opened on Sandgate Road. In total, Folkestone had five cinemas throughout the early 20th Century. 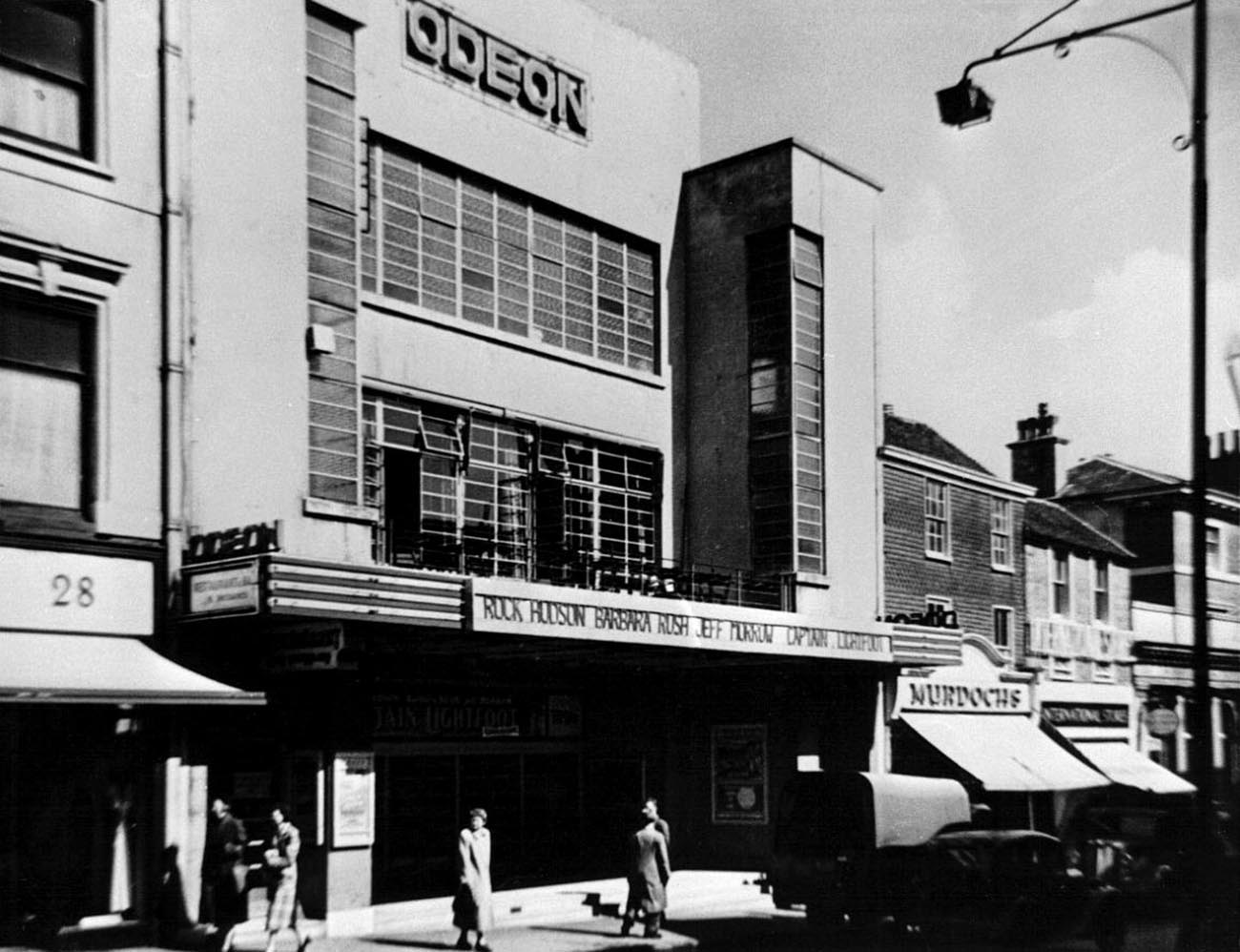 The End of an Era

After the war, cinema audience attendance began to fall throughout the 1950s, and by 1962 the Queen’s, Electric, and the Playhouse cinemas had all closed. The Astoria (renamed the Odeon) followed in 1974, leaving only the Central Picture Theatre, later renamed as the Cannon Cinema. The Queens, Playhouse, and Astoria buildings were all demolished, while the Electric building was converted into a bingo hall, nightclub, and then flats.

Around this time, Folkestone Town Hall had also been closed and was eventually sold off for retail space in the mid-1980s, seemingly putting an end to the venue that had been one of the first to screen films in the town.

Finally, the great storm of 1987 caused damage to the Cannon building, and repairs were considered unjustifiably expensive. It was closed and subsequently demolished in 1988, leaving Folkestone without a cinema for the first time since 1910.

Bringing Film Back to Folkestone

Alexander ‘Sandy’ Wallace had been involved with cinemas throughout his life, and by 1988 was operating the Flicks Cinema on Queen Street in Deal. With nowhere left for local people to see the latest movies, he saw an opportunity to bring film back to Folkestone by setting up a new cinema with his wife Mary. While searching the town for the ideal location, he discovered that the upper floors of the Town Hall were still vacant and unused.

The empty rooms were leased to Sandy Wallace in 1989, who recalls that he found the rooms “filthy and full of pigeons”. With the location secured, work could commence on Folkestone’s new Silver Screen Cinema.

The original town assembly hall was converted into the main screen, with a suspended ceiling added to improve acoustics and insulation. The front of the room with its arched windows dated from 1860, while the balcony and wooden panelling at the rear was a later addition in 1905. The original public gallery built in 1860 was sectioned off and repurposed as a projection box. Near the front, a side doorway led to an original 1860 “green room” and this was converted into a small kiosk for selling ice-creams during film intermissions. 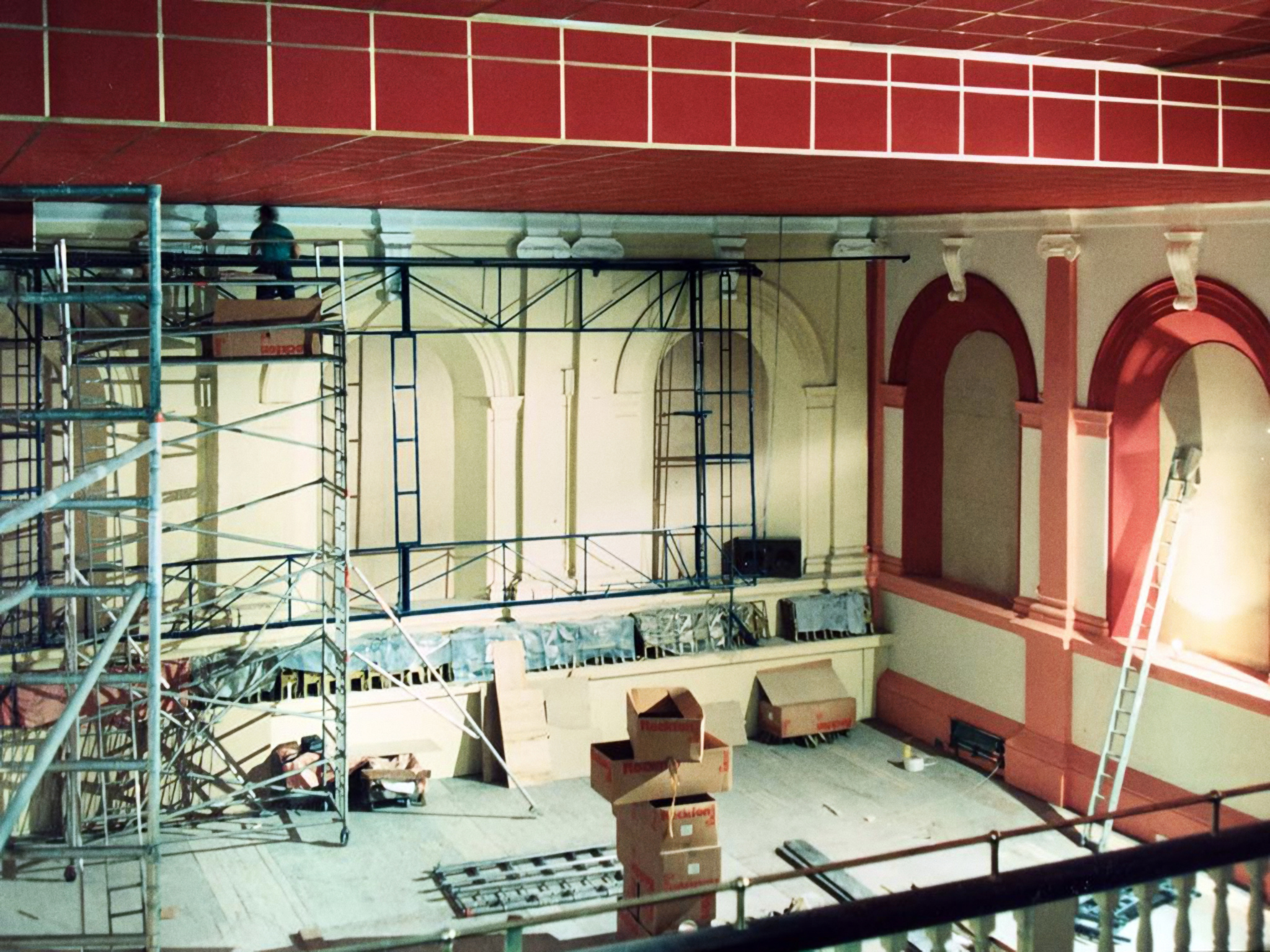 In the old magistrate’s room and council chamber, a frame was installed above the stage to create the much smaller second auditorium in 1989. The wooden panelling around the walls – dating from 1905 and painted with the names of Folkestone past mayors and dignitaries – was preserved as a feature of the auditorium. The chamber’s balcony was sectioned off to create a tiny projection box. 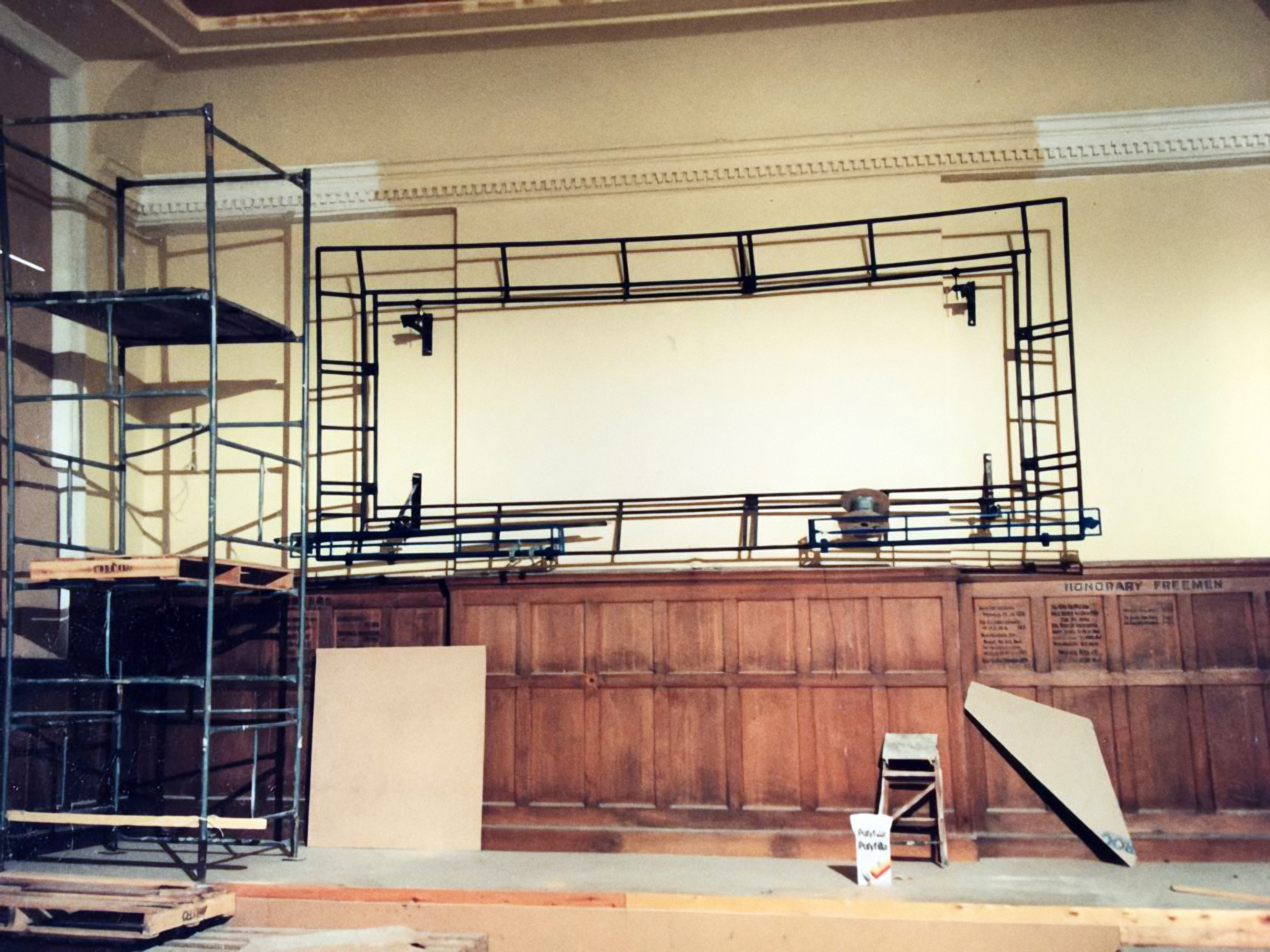 Completed in 1990, the cinema’s entrance was recessed in an arched alcove at the front of the building. The entrance archway originally led to a passage running from Guildhall Street to the Market Square at the rear of the building, but this had been blocked off by a new lift shaft and staircase leading to the upper floors, constructed after the building was sold in the 1980s.

The doors were painted gloss black and white, with the cinema’s name in silver lettering on the glass. Two poster frames to the left of the doors announced the current films and just inside the doors, information boards displayed programme information and ticket prices.

The cinema hosted a preview night for invited guests at 7.30pm on Saturday 21st April 1990. Manager Ian Luck and assistant manager Nick Prince were in charge. Ian Luck remembers last-minute building works were overrunning on the day: “They were still screwing the door handles on just before we let everyone in!”

After two years of planning and hard work, the Silver Screen Cinema opened to the public at 1.45pm on Sunday the 22nd April 1990. To celebrate the opening, the first adult to purchase a ticket was given a bottle of wine, and the first five children in the queue were each given a box of sweets. The first films to show were the cold war thriller ‘The Hunt for Red October’ and the family sci-fi adventure ‘Honey, I Shrunk the Kids’.

These photos show the cinema as it was when it opened in 1990. In the foyer, Sandy Wallace can be seen waiting to welcome customers at the box office. 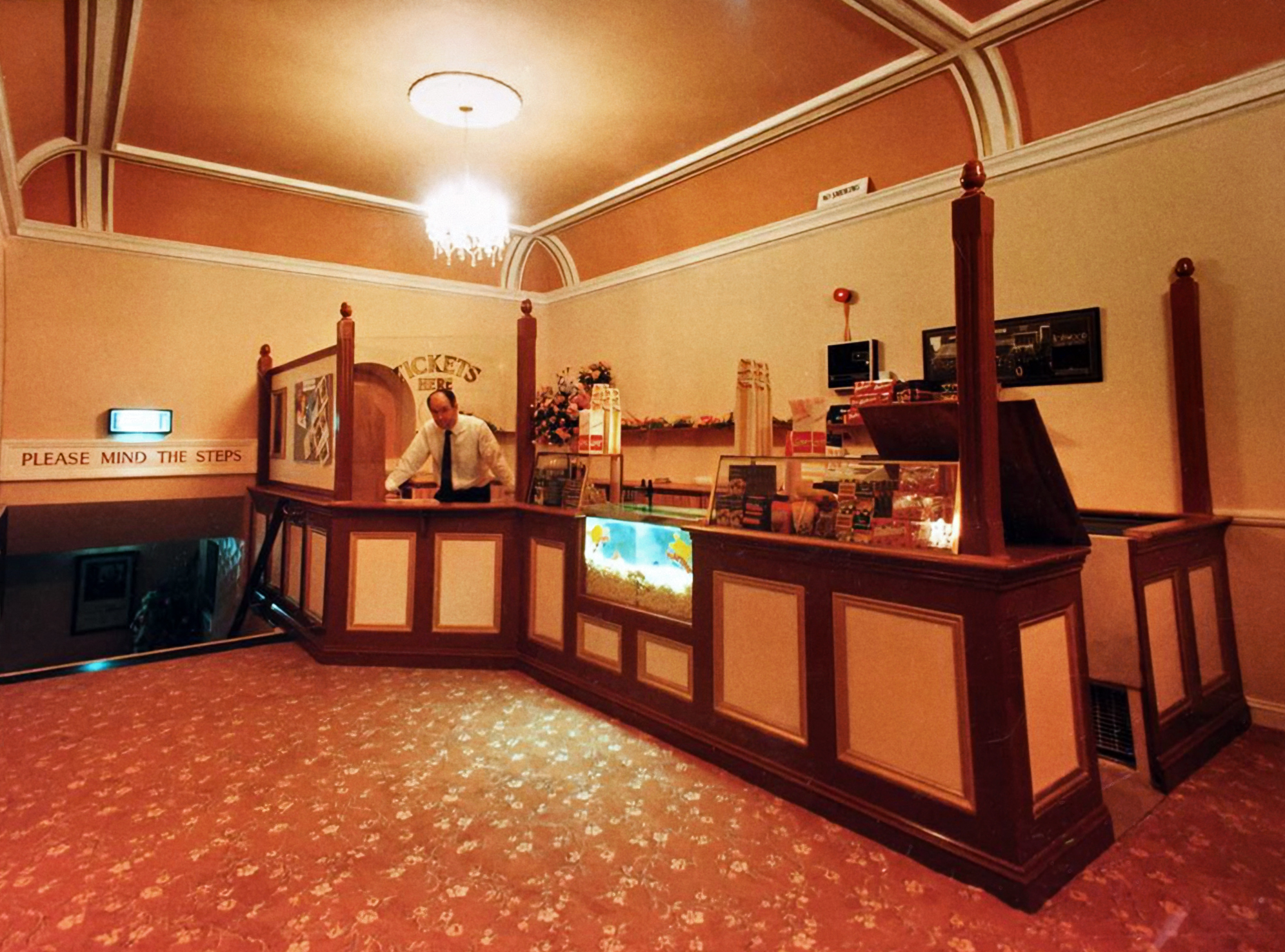 The cinema seated 537 when it opened; the antique seating in the main auditorium dated from 1925 and originally came from the Drury Lane Theatre in London. 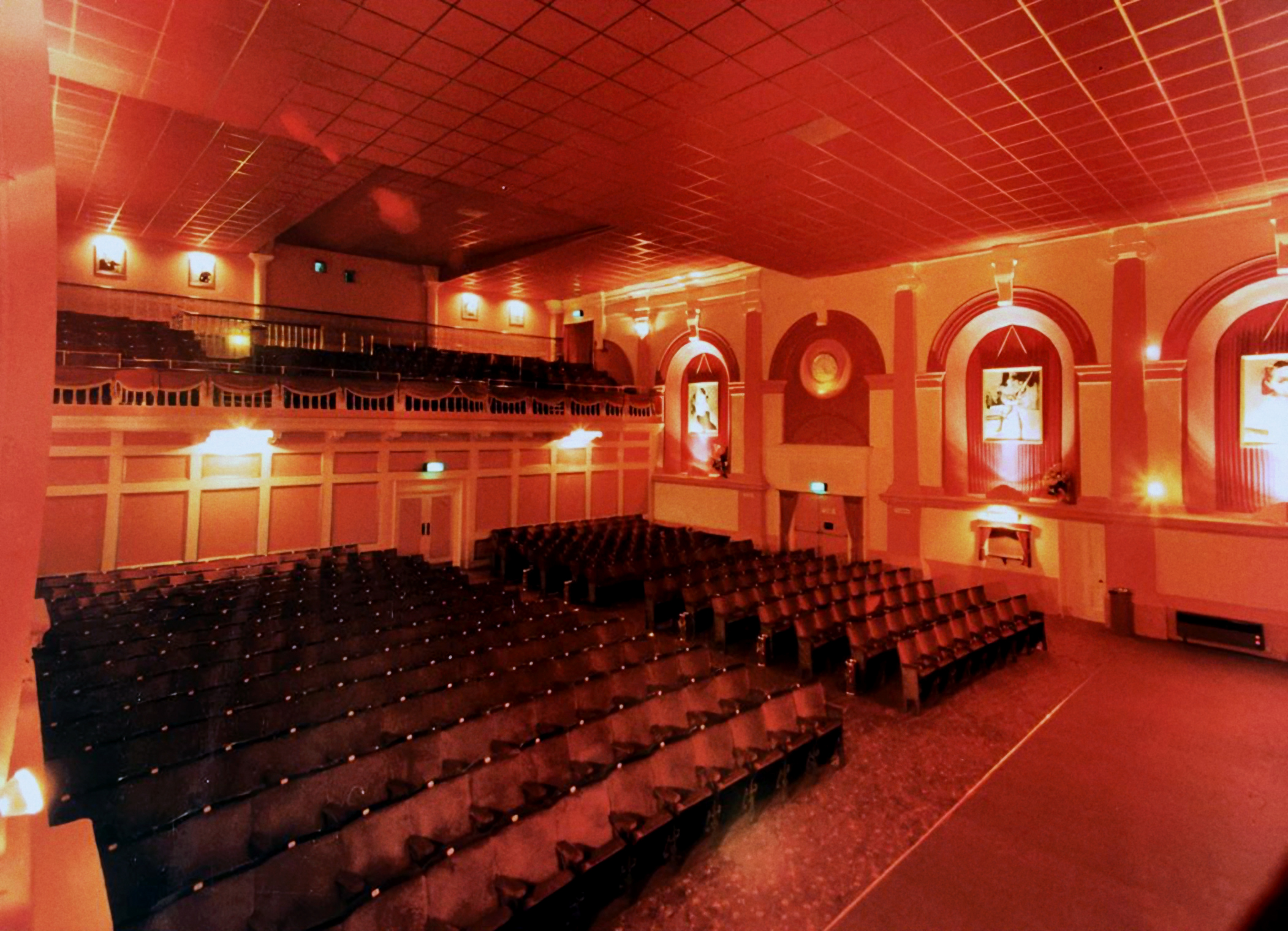 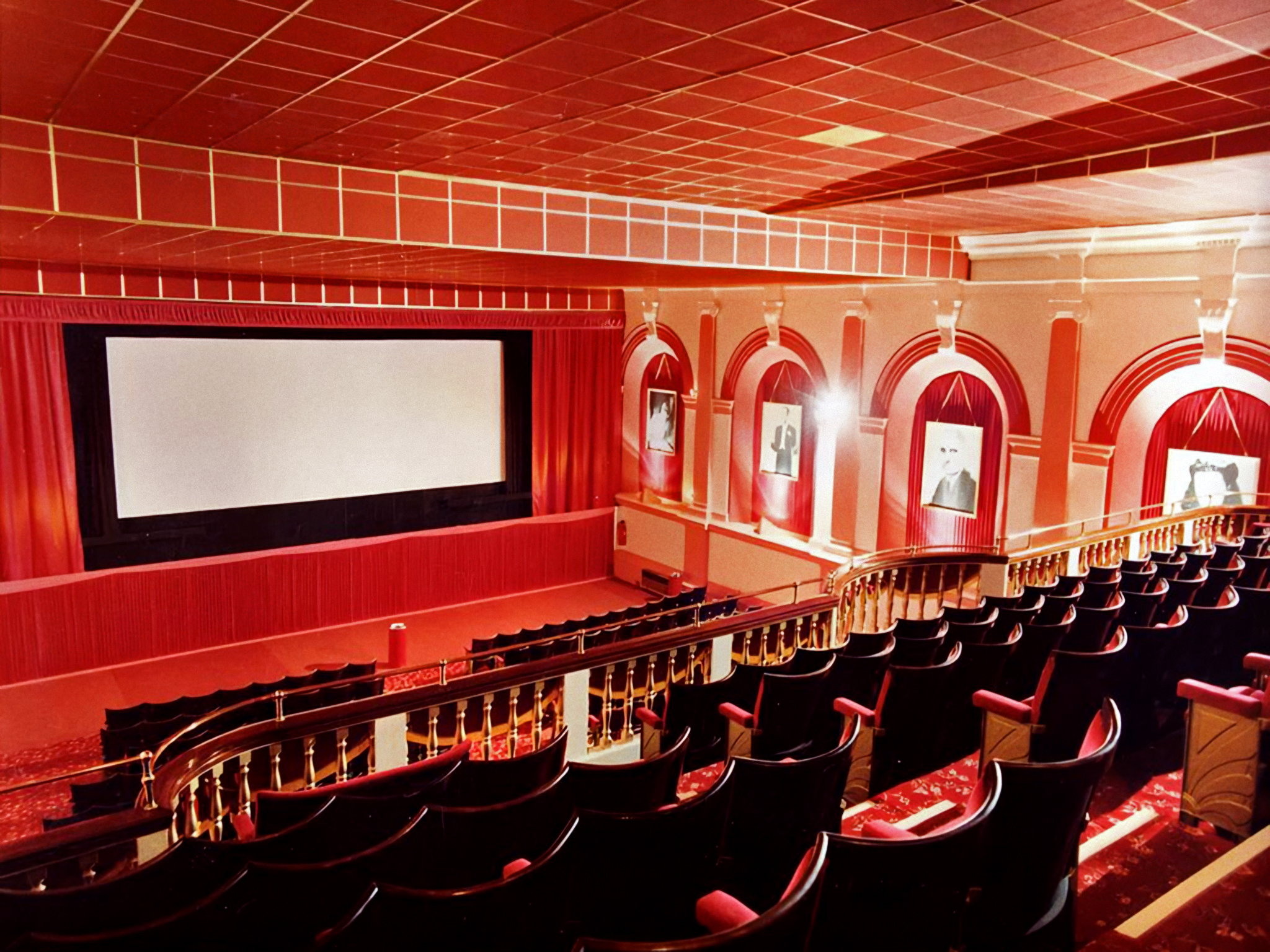 The smaller auditorium originally seated 106, and was unraked with the screen mounted high on the wall. The layout and seating would change several times over the years to improve sight-lines and comfort. 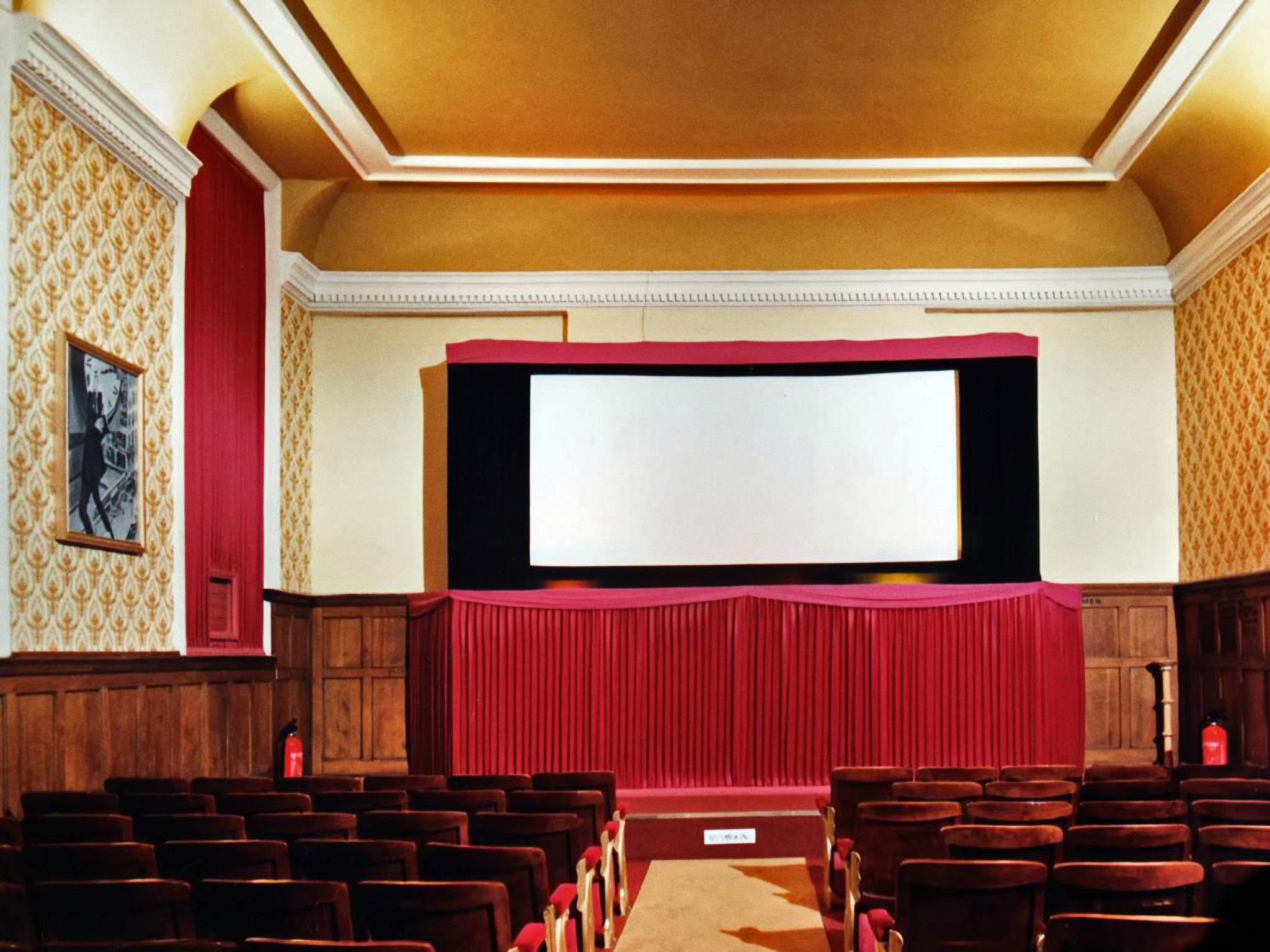 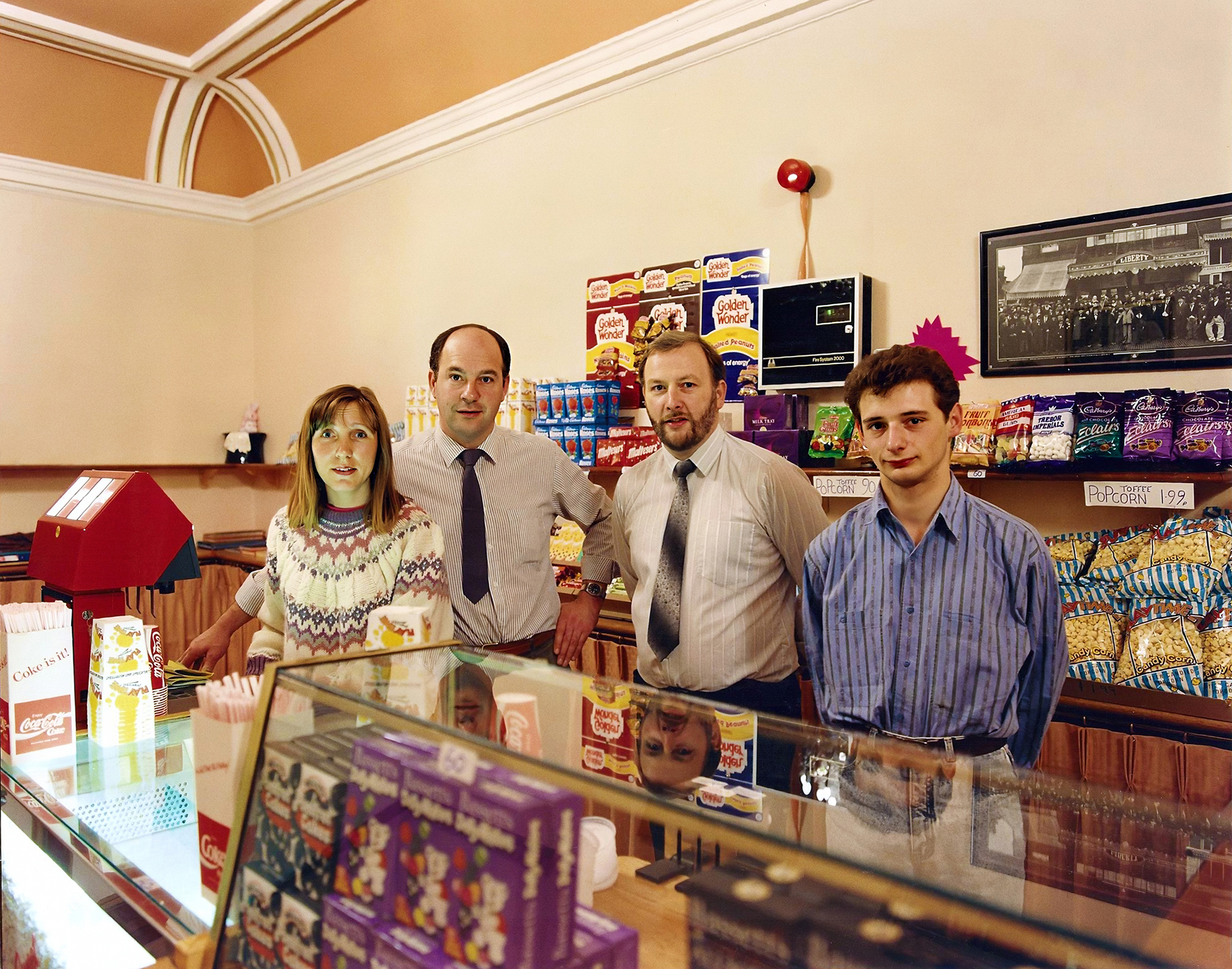 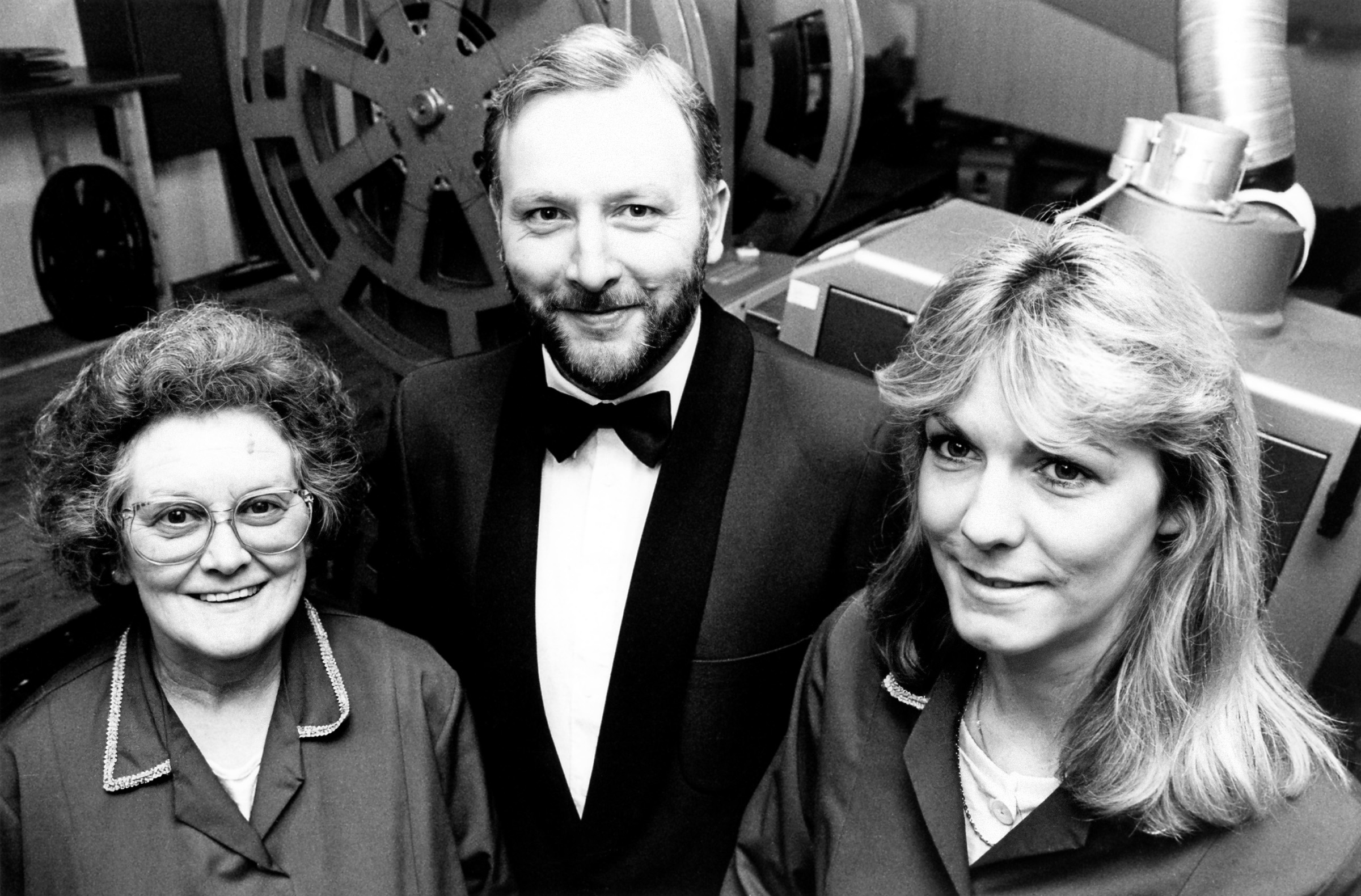 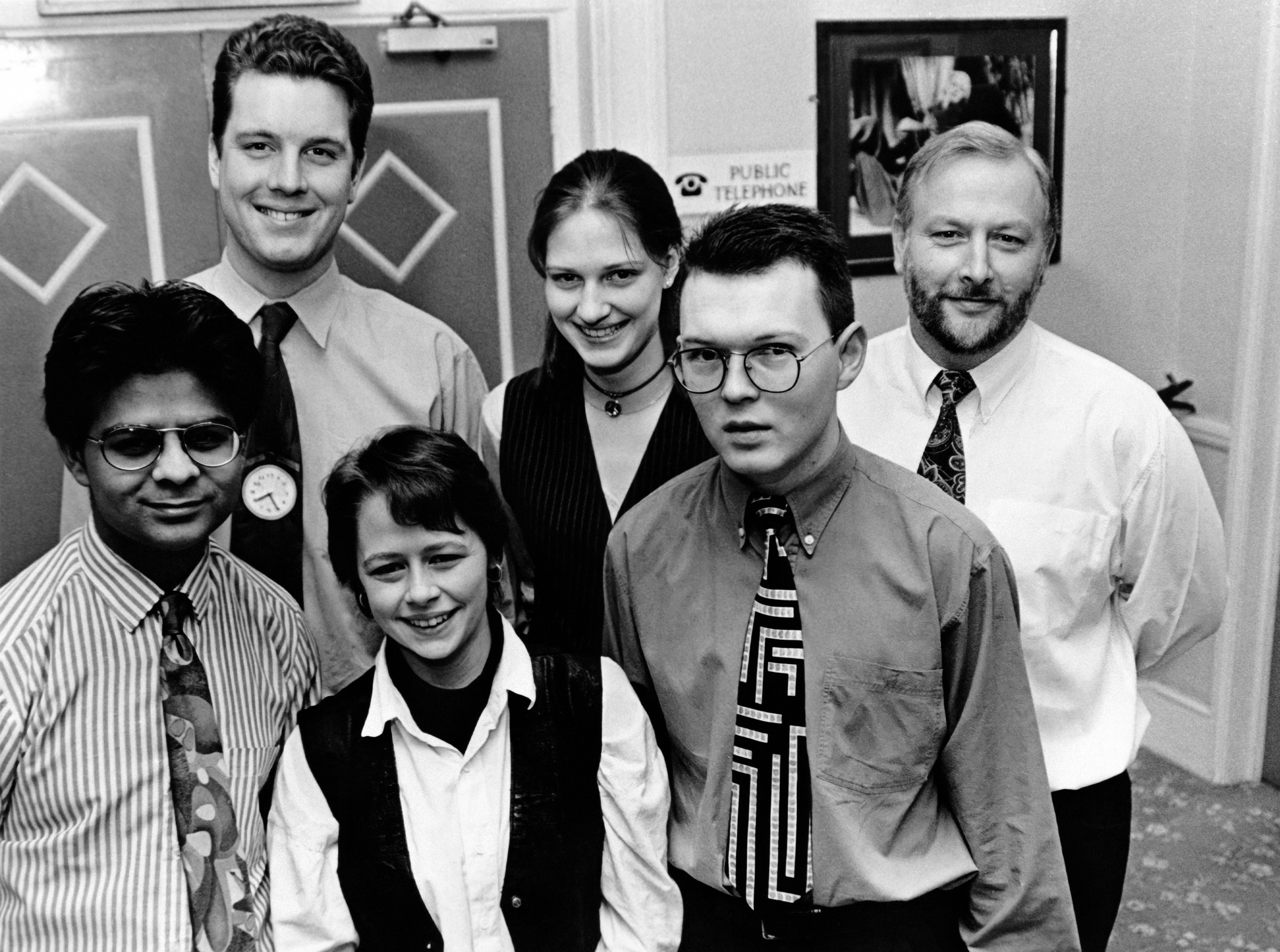 We use cookies on our website to give you the most relevant experience by remembering your preferences and repeat visits. Read More. By clicking “Accept All”, you consent to the use of all the cookies. However, you may visit "Cookie Settings" to provide a controlled consent.
Cookie SettingsREJECT ALLACCEPT ALL

This website uses cookies to improve your experience while you navigate through the website. Out of these, the cookies that are categorized as necessary are stored on your browser as they are essential for the working of basic functionalities of the website. We also use third-party cookies that help us analyze and understand how you use this website. These cookies will be stored in your browser only with your consent. You also have the option to opt-out of these cookies. But opting out of some of these cookies may affect your browsing experience.
Necessary Always Enabled
Necessary cookies are absolutely essential for the website to function properly. These cookies ensure basic functionalities and security features of the website, anonymously.
Functional
Functional cookies help to perform certain functionalities like sharing the content of the website on social media platforms, collect feedbacks, and other third-party features.
Performance
Performance cookies are used to understand and analyze the key performance indexes of the website which helps in delivering a better user experience for the visitors.
Analytics
Analytical cookies are used to understand how visitors interact with the website. These cookies help provide information on metrics the number of visitors, bounce rate, traffic source, etc.
Advertisement
Advertisement cookies are used to provide visitors with relevant ads and marketing campaigns. These cookies track visitors across websites and collect information to provide customized ads.
Others
Other uncategorized cookies are those that are being analyzed and have not been classified into a category as yet.
SAVE & ACCEPT
Powered by